Kirk Coco: a brewery founder makes his way to Bellwether

Kirk Coco, Bellwether’s Director of Sales and Marketing, joined the Company in June 2018. His path to Bellwether, and to IT consulting, was certainly an unusual one: he went from personal injury attorney to naval officer to local brewery owner. Kirk opened the doors of Nola Brewery, on Tchoupitoulas, in 2005 as a passion project to bring beer production back to New Orleans. After an evening at Mayfair lounge, sipping on a Dixie Beer, Kirk realized that the famed New Orleans beer company was no longer produced in New Orleans. This was something that didn’t sit right with Kirk; he quickly set out to change it. 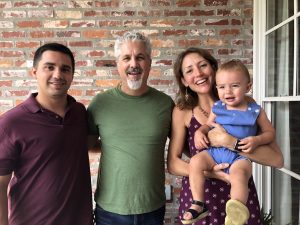 Opening a brewery, with all of its enticing fun, has its challenges, to be sure. “The city hadn’t issued permits for a brewery since Dixie Beer (about 100 years), so they didn’t even have the paperwork at City Hall,” says Kirk. “Getting all of our Federal permits took only about three months. However, getting the permits from the City of New Orleans took one and a half years… it took over a year alone to get the water meter.”

After 11 years in the food and beverage industry, Kirk was ready for a steadier and more reliable nine to five job. Tapping into his childhood love of computers and machines, he made his way to IT. Kirk started at Bellwether as the Director of Operations, a position he stayed in for roughly eight months before taking on more account management. Now, most of his days are spent on calls with clients and working with Zasha, Operations Manager, and Rodney, Professional Services Manager, to make sure the trains stay on the tracks and all Bellwether clients are well taken care of.

The tenacity and perseverance it took to get the doors of Nola Brewery open speak to Kirk’s attitude more generally. At Bellwether, he is the go-to man to deal with the Company’s biggest clients with the most complex systems and bureaucratic hurdles to overcome. He is disciplined yet funny and playful.

“I love interacting with clients, and frankly, I love the challenge and thrill of putting out fires. It’s satisfying work and I really connect with many of my clients… most of them are now friends.”

What keeps Kirk at Bellwether? “I love that Poco and Steven are always so concerned about the employees – it actually reminds me of my time in the military. Good commanders are always thinking about how we can make life better for our team.”

Outside of work, Kirk loves spending time riding across the country on his BMW bike. Most recently he rode from New Orleans to Florida to Chicago and back down the Mississippi River to New Orleans, which took him three weeks in total. He lives in Uptown with his wife, Danielle and three-and-a-half-year-old son, Cary. His 26-year-old son, Kirk Jr., is stationed in Japan with the Navy.

Out to Lunch Podcast: Life Online
Is this Website Address Safe to Visit or Login To?